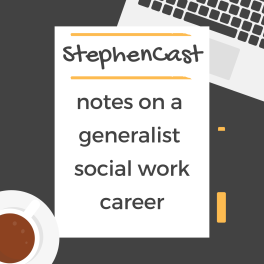 For this Friday, I’m expanding on the calendaring discussion from last week, and zoning in one of the biggest problems with modern calendars. As someone who went from a static paper calendar to my Palm Tungsten in the early 2000s, to my smartphone with an integrated work calendar, I welcome how I can share my schedule. The downside, though, isn’t just a minor inconvenience. It’s a problem. However, rather than ranting about what doesn’t work about this, I just need to address what’s troubling me about this and address it.

Listen to the podcast here:  https://spcummings.podbean.com/

Technology nostalgia: I mentioned the Tungsten E planning device. I really, really liked it! I didn’t have a wifi-enabled version, but I did sync the device regularly to my work computer. I recall having to beg permission to get the application that allowed me to manually sync my Palm device to my computer via a proprietary cable.

I also look back fondly to my Blackberry Bold, which I carried in 2010. (I posted a response to a question posted on Twitter by Dr. Echo Rivera:

Well, I think it was the first phone I ever had that could steam music, and automatically download podcasts. I shot videos of my son and uploaded them to FB from that phone first. I liked the keyboard! It was impractical but still, I liked clicking it.

I don’t think I could ever go back. BlackBerry never kept up. And the keyboard is static. But that doesn’t mean nostalgia is rational. I have a basement office full of vinyl albums I can use to testify to that.

I’m finally starting this new blogging project, where I occasionally comment on popular podcasts, with a social work POV. This first one is…not exactly timely. “Missing Richard Simmons”, finished its short run months ago. I drafted this in April and I promised myself I’d get this out sometime in the summer. So, here it is.

Richard Simmons wasn’t a therapist, but part of his persona included reaching into peoples’ lives, rather than just simply reaching out. The hit podcast may seem invasive, but I appreciate the reasons for making it, and from a practice perspective, its creator has a point.

I listened to all of the Missing Richard Simmons podcast a couple of weeks ago. I confess I added the podcast to my queue out of morbid curiosity. The premise had less-than-defensible overtones: Simmons, a well-known health guru and public figure (at least to people in their 40s and older), a person who appeared to thrive on public attention, decided to retire from view. Abruptly. Or (this is where the speculation starts) maybe he didn’t make that decision on his own. The media concern for his well-being suggested a story with a low factual threshold: that Simmons was taken out of the public eye by force and exploited for his wealth…or, maybe, something along those lines. It’s a mystery! Simmons eventually made a public statement last year, assuring us he’s fine.

The six-episode podcast series was created, written and hosted by Dan Taberski, who worked for the Daily Show and was a member of Simmons workout studio in Los Angeles. He created the show because he saw Simmons as a positive force, and his retirement seemed too abrupt, just simply too unlike the Richard Simmons he came to know, to be understandable without at least some explanation.

A little personal disclosure: I’m old enough to remember the home exercise craze of the late 1970s and 1980s. Our early-adopter family had a VCR in 1981, and I recall my mother recording The Richard Simmons Show. I was only 10 years old when this show was on the air, but even then, it was clear to me that Simmons was more than a host: this man was clearly motivated by his mission. His motivation to help people improve their lives seemed authentic. For Simmons, this meant weight loss. In the show’s opening credits of his talk show, you see Simmons’ personalized license plate, and as a mission statement, it’s all you need to know: YRUFATT.

Until 2013, Simmons stuck with this mission. Depending on where you start the clock, that’s about four decades. That early show is long gone, but the books, the home videos, the guest appearances, and the workout studio lived on. He’s been there for his fans, particularly people who truly need him to be the force in their lives. Missing Richard Simmons includes an amazing example of how real this relationship with the public manifested: Simmons encountered a woman in Iowa, working at the factory that produced the cookies Simmons was branding. She expressed her need to lose weight. Simmons didn’t just have a single, life-changing conversation with her. He maintained a relationship over time, by phone, for years.

Consider the expectations for a formal helping relationship, and Taberski doesn’t seem the one actively crossing boundaries; in the parallel context of social work practice, he fits the role of client. When Simmons all but disappeared, after failing to showing up to his workout studio one day for a scheduled class, Taberski (and, by extension, anyone who saw Simmons as a leader or a mentor) was concerned, confused, and, understandably, hurt.

Now, of course, let me observe the big caveat with this analogy: Simmons is not a licensed therapist. He’s a public figure, and while he has sought to help people, he was never in a legal contract, nor was he professionally obligated by any Code of Ethics to end relationships in a way that provides people with a sense of closure and understanding of what to expect in the future. That said, throughout his public presence, Simmons built a brand on emotional human connection. The example in Iowa is one case. For Simmons, his professional brand included not just his guest appearances on late night television talk shows, but his willingness to really connect with people over time. When you are calling someone on the phone to extend support to that person, expectations are going to develop.

The NASW Code of Ethics does have language regarding the termination of services (1.16, b): Social workers should take reasonable steps to avoid abandoning clients who are still in need of services. This section of the code states that, should termination be deemed necessary, social workers should be aware of all the possible factors to minimize negative impact on clients, including assisting in making appropriate arrangements.

Again, this is not something Simmons was bound to do. And, quite frankly, we don’t know what led to his decision to withdraw. That speculation is what led Taberski to create the podcast.

What Missing Richard Simmons does demonstrate is the impact ending a helping relationship precipitously has on those being helped. For those of us in social work, it’s worth noting how much power we have when we extend a hand to those who need it, and how we set expectations for when, inevitably, we need take that hand back.